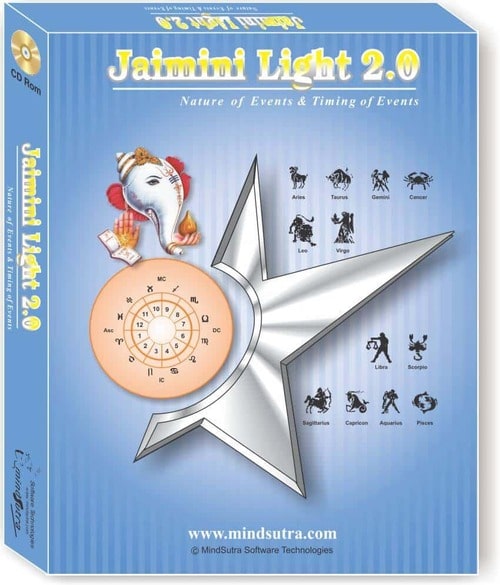 Price Includes Shipping Charges in India, Outside India-Downloadable Link Only.

Although Jaimini system of Astrology is generally considered to be an offshoot of Traditional Parasari system, in fact it is a part and parcel of ancient Indian Astrology. There are certain delicate niceties, which make the system so unique. In many cases, it will be found that sage Jaimini had dispensed with cumbersome calculations, and instead had offered some simple yet very useful methods. In this system, the signs are given relatively more importance, and the 'aspects' are considered of signs - not of planets (which happens in traditional Parasari system). The Dasha-systems are also distinctly different; in most cases*, those are not of planets - but of signs; those are not at all dependent on the longitude of the Moon, and there is no question of finding the Balance of Dasha at birth; the durations of all the Dashas - including that of the commencing one - are always in terms of a number of full years.

(* However, there are certain exceptions in case of a few Jaimini Dasha-systems like Karaka Dashas - Atma-Karaka Dasha and Upa-Karaka Graha Dasha - the Dashas are of Signs and Planets combined. Besides, in these cases, only those signs which are occupied by planets will appear in the list of Dashas; the remaining signs will not have their Dasha-periods.)

In Northern and Central parts of our country (India), the Jaimini system of Astrology could not become at all popular; here people seem to be overly obsessed with Vimshottari Dasha, which is - probably without any justification - considered to be Parashari. It is the opinion of many learned Astrologers that the authenticity of Brihat Parasara Hora Shastra is considered suspect. Even the great authors of relatively recent origin (in comparison to sage Parasara) like Varaha Mihira (of Brihat Jataka), his illustrious son Prithu Yasha (of Hora Sara), king Kalyan Varma (of Saravali), etc Astrologers of great standing did not mention anything about Vimshottari Dasha in their books. It was mentioned only by Mantreswara (of Phala Deepika) of South India, and is also found in certain other work of Yavana origin (in Chandra Bharana Jataka). For finding the nature of events, and more particularly for finding the timing of events, more often than not, the much over-used Vimshottari Dasha system offers very unreliable results.